In the last post, I mentioned the disaster area known as the garage. There are no before pictures because I forgot to take one :D

So much room for shenanigans!

With that out of the way: 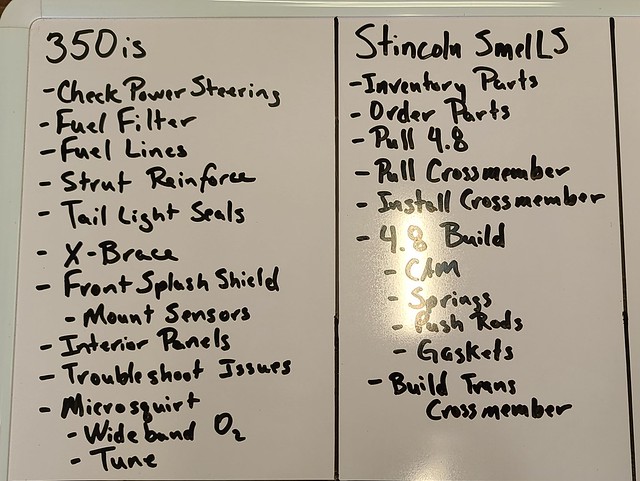 I ended with up pulling the 4.8, staging parts for the build, and making the first repair on the Stincoln SmelLS.

Even if this repaired armrest never make it to the car (it probably will), it was a way for me to set the tone . . . establish an easy win.

Que the garage music and crack a cold one . . . off to finish part inventory and ordering parts!

Updates in the Garage

I sent the Microsquirt unit and adapter harness to EFI Source for a checkout. They indicated the unit was good and reloaded a base map. I can plan the final bit of clean up work and get ready to learn how to tune stuffs.

With the Roach gone, the garage is a complete disaster area! I guess I need to grab a broom and dust pan before I attempt to do anything above.

The 350is runs on a Cobra (X3Z) ECU. While it "runs" and "drives", there is a huge hesitation starting around ~3200ish rpm under WOT. It only revs cleaning to the limited under light throttle application. With a Cobra MAF and 24lb injectors, there shouldn't be too many issues using this ECU . . . supposedly. To avoid shotgunning parts, I checked all the usual stuff  (no codes other than the missing emissions equipment) and came up with some possible issues:

There are some free and near free (both labor and $$$$) items. The basic stuff like checking grounds, cleaning the MAF, spark plug gap would be a great place to start. If those do not resolve the issue, I'll move on to replacing part that I currently have on the shelf. An example is the fuel pump and strainer are factory original 1993 items. I'll replace this due to its age. If that fails, then I'll move onto other parts.

The EEC-IV is capable of running a lightly modified 5.0L. Unfortunately, all these ECUs are old, used units that are highly suspect. They may have solder issues or have been incorrectly modified. A fragged ECU was one of the initial problems that plagued this build.
A canned tune cost $250 with the price rapidly increasing for true dyno tune. The equipment to self tune an EEC-IV is $300-650, but I would still be stuck with the EEC-IV. If the current X3Z is fragged, I would have to find a decent replacement to use. Those replacements vary from $30-500. So what to do? Enter MicroSquirt!!

I picked up this little box and adapter for cheap. As usual, it is from an abandoned project. Even with adding in the cost of wideband (needed for any type of tuning) and a fully unlocked suite of tuning tools, it is about the same as decent tune.

Email ThisBlogThis!Share to TwitterShare to FacebookShare to Pinterest
Labels: 350is, BMW, Hillclimber, MicroSquirt

I received my refurbed sending unit 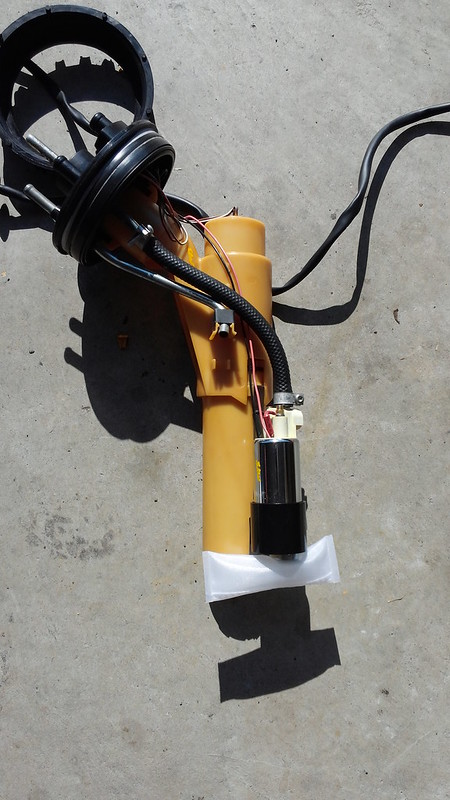 It looks way better than the one that came out of the 780. 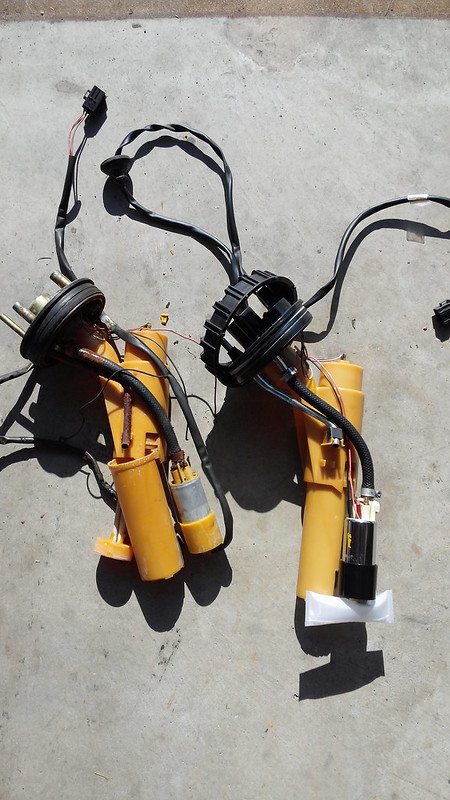 Checked all the hoses for rot and they "looked" ok. After stabbing in the refurbed unit, I hotwired the pump to prime the system and sprung a giant leak. Sigh . . .

The pressure hose that "looked" ok apparently was not ok. It ruptured in 3 . . . THREE . . . places. And of course the hose clamp is completely out of view and can only be accessed by dropping the tank.

Well, jacking up the car on soft dirt was not happening. Out comes the razor to trim away as much as the hose as possible. I took a pair of side cutters and snipped the hose clamp. Success!!

Eh . . . not so fast. I have to get a new clamp on there and tighten it blind. After what seemed like hours of fiddling, I had the new hose and hose clamp on it. Let's try this again . . . .

I hotwired the pump to prime the system and found no leaks.


She's running a bit rough and coughs a bit; not bad for sitting up for 3 years. After idling for about 15mins, it did smooth out a bit, but still has a slight hesitation. Took her for spin around the yard with the rear suspension riding on the bump stops (nivomats are dead). A tune up will probably make her sing. For now, it runs and it drives.