I took the chance today to redo the fan setup. I didn't particularly like the Volvo pusher setup, nor did I want to cut up the core support to move the radiator forward to make room for it to be a puller.

Headed down to the local part store and strung lower radiator hose and universal fans across the parts desk. The store mgr and parts dudes enjoyed watching me measure things with a set of digital calipers and writing dimensions down.

Made a purchase of a SN95 lower radiator hose and a 12" universal fan. Went over to the DMV to get plates for the beast (yes, it will be street driven!!).

The garage is a WARZONE!! Tools and parts are scattered everywhere. It is almost like someone is trying to build a car or something!! I took a minute to clean up. Seriously, I took a whole minute.

I removed the Volvo fan and installed the slim universal fan as a puller and put the ole girls face back on.

Installed the catch bottle and filled the radiator with coolant. Fire the beast up and something strange happened . . . The Check Engine light went out briefly and came back on . . . . hmmm. I think my best best is to get another Main Harness after all of this dies down and wire it in.

I turned my attention to the throttle cable. I drew up this Rube Goldberg actuator in my head and proceeded to make the brackets for it. After getting it all made up, I tossed it because it appeared to look more like a hack job than a throttle mechanism. I'll head to the bicycle shop and get some cable nuts and do it a different way.

I fired the car back up to test the throttle for, you know, science. Holy hell is this thing running rich!! Being the car guy I am, I goosed the throttle and proceed to shoot a 2 foot fireball from the exhaust!! I should've had a video of that one . . . Mrs. Zero just asked "What the hell? What the hell!!??"

I don't a have a timing light, but I did retard the timing a bit to get rid of the fireball. Maybe this MAF isn't calibrated for the 24lb injectors like I was told when I bought it. . . . no surprise if it isn't.

Burped the cooling system an checked for leaks:

Shut the car down and threw some jack stands under the rear. 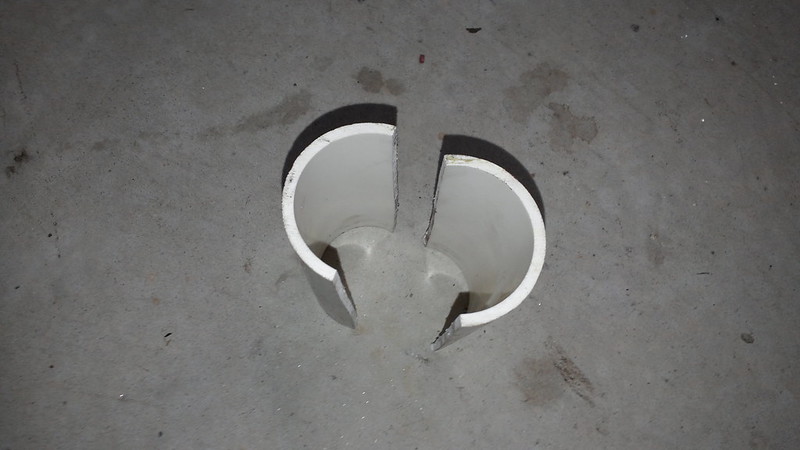 Installed the seal and driveshaft then turned my attention to the clutch hydraulics. The E36 sorta self bleeds the air with a workout of the clutch pedal. Everything has been plumbed and ready. I topped off the brake reservoir (it is shared on BMWs) and pumped the pedal . . . . Nothing . . .

I removed the hose from the line coming from the master . . . Nothing. WTH?? I know the car has sat for years, but it can have THAT much air in such a small circuit.

Not being put off by things like this (yeah I was perturbed), I contorted myself upside down in the car to the master out. After removing it, I took it to the bench and disassembled it. My gosh . . . look at all of that crud and crap in there . . . That would stop fluid from flowing.

I cleaned the bore with a bore brush and ran a 12 ga wire through the opening to clear it out. Inspected the seals and they still looked ok. Oiled the bore and seals with some brake fluid and reassembled it. Proceeded with my contortion act again and reinstalled it. Success!! We now have a moving clutch arm!! And a leaky hose fitting at the slave cylinder . . . . Looks like I have three leaks to contend with now . . . . Still not too bad!!

I shut the garage down @ 4 am for some needed shut eye.

Tomorrow will be wiring relays (I know . . . I know . . . I've been saying that for days), installing the front suspension, correcting the throttle cable, and getting a timing light on it.

A lot has been going on in the garage so the blog took a bit of a backseat. Here's all the stuff from the last few days.

My homies, Harold and Frank came over to the garage. They helped out on tracing wires for the buzzy fuel pump relay. We went to CarQuest and got a Ford relay and socket. I rewired it based off of TMoss' wiring diagram. After wiring in the relay, we went through all of the fuel pump checks and I attempted to pull codes from the ECM. All of the fuel checks indicate that the fuel pump is good and wiring is good. However, the ECM part of the procedure failed and I couldn't pull any codes from it . . . . DAMMIT . . . I shut the garage down for the night and had a beer or two.

Today, I dinked around with the ECM. This ECM does not look like it came from an accident damage Mustang . . . more like a water damaged one. 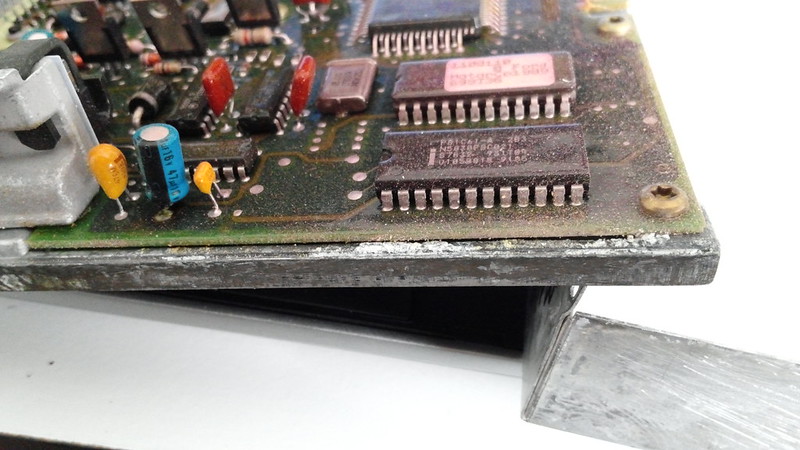 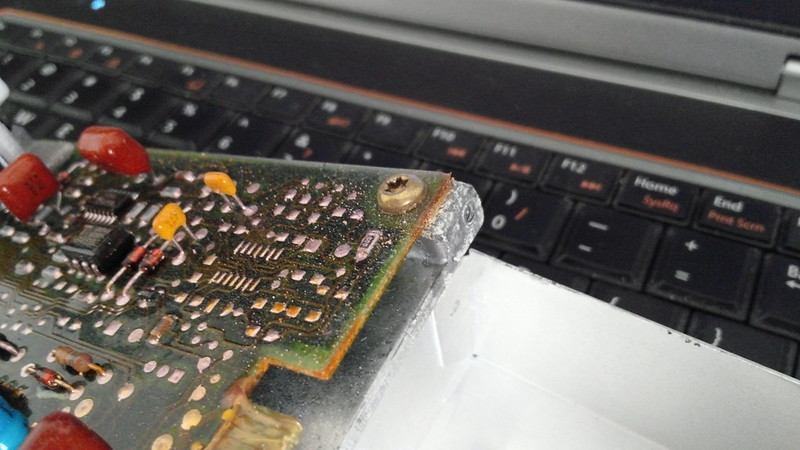 I removed the engine and trans to get after the oil leak. It was leaking in 2 . . . TWO places; the front where it meets the timing cover and the rear where it meets the rear main. I dropped the pan, cleaned up the oil and gasket (Felpro!!) and laid down a caterpillar of Form-a-Gasket goo. After letting it setup for a few minutes, I bolted the pan back to engine. 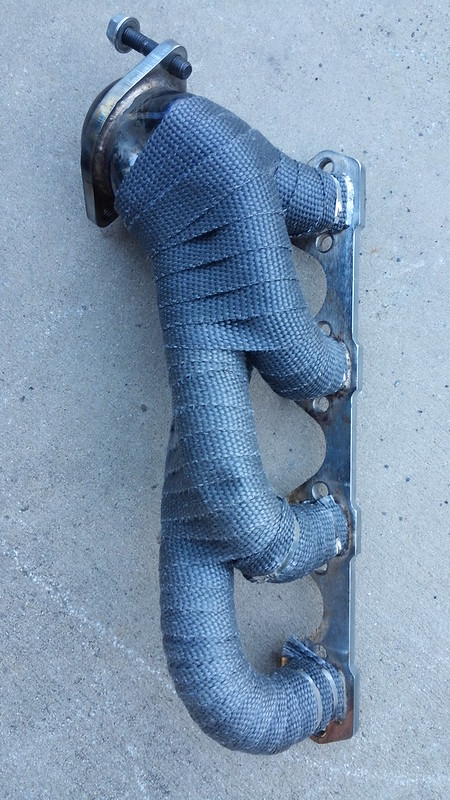 Not to bad for a first timer!!

Frank came over and offered a hand in reinstalling the beast. I dinked around with the ECM and fuel pump relay for yet ANOTHER day. My determination is stubborn!!

I spent the today trying to track down an ECM and came up empty. Since it runs by using a jumper on the relay to activate the fuel pump, I decided to manually switch the fuel pump on via a second relay.

The long nights in the garage are starting to wear on me. I shut the garage down early and went to bed.

Day 30!!! And the beast hasn't moved under it's own power yet. Mainly due to me fighting with a crazed ECM that does some strange shizzle.

Today I shopped till I nearly dropped. I picked up a few odds and end to finish this build off . . . Looks like I will be using the slack time as predicted . . . 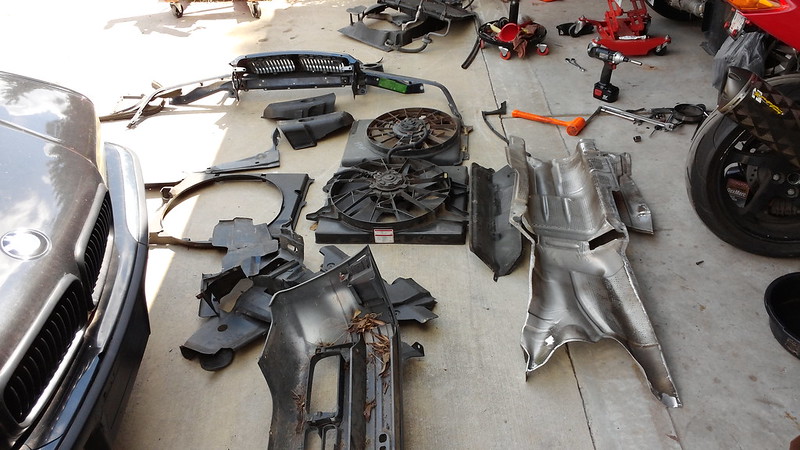 Some BMW just puked up some parts 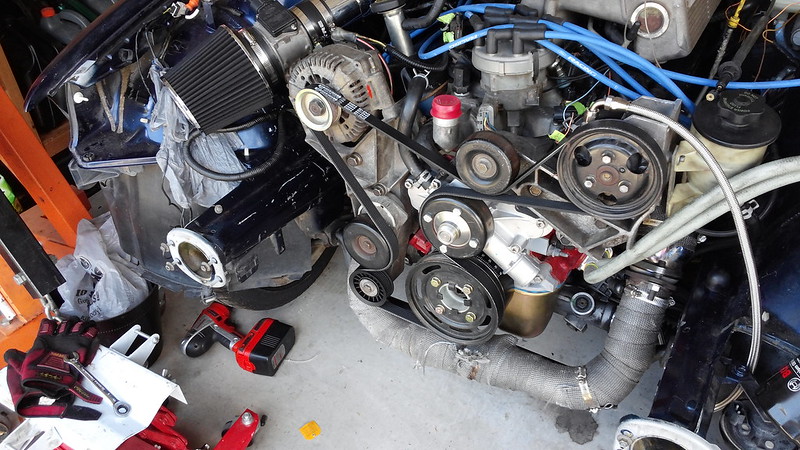 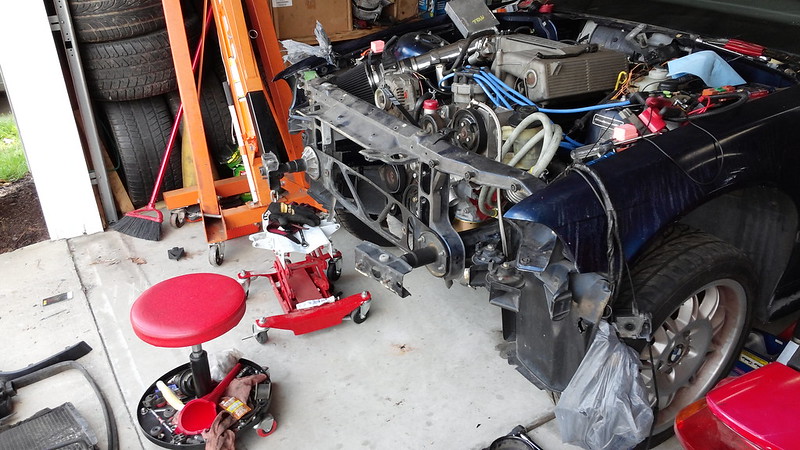 Starting to add her face! 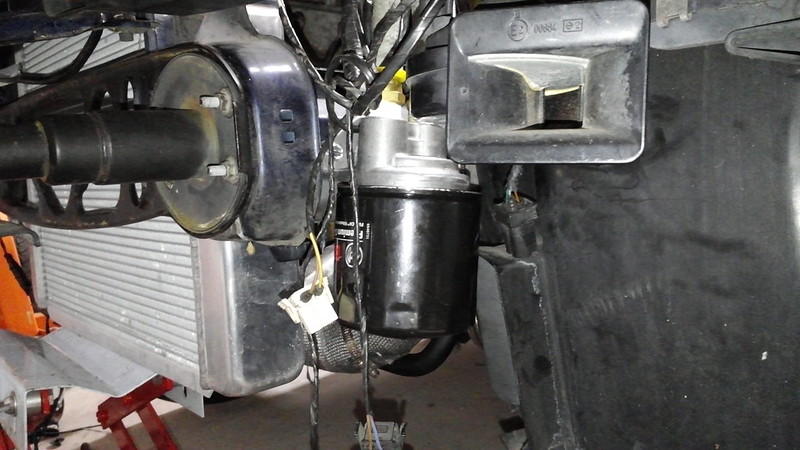 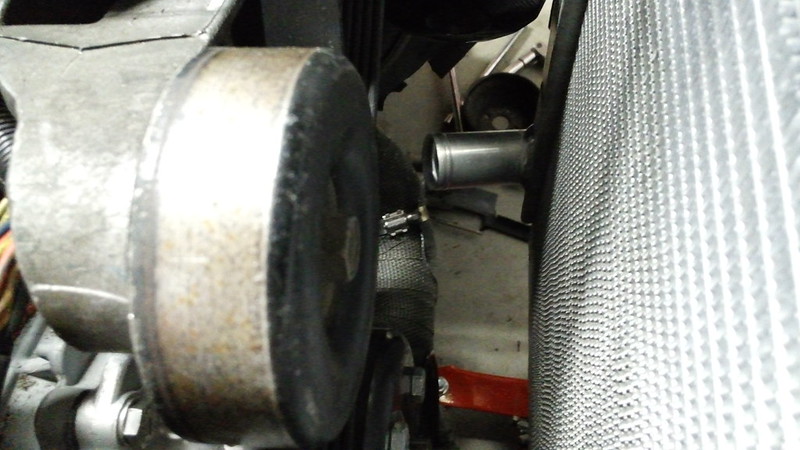 Mocking up the radiator: Lower 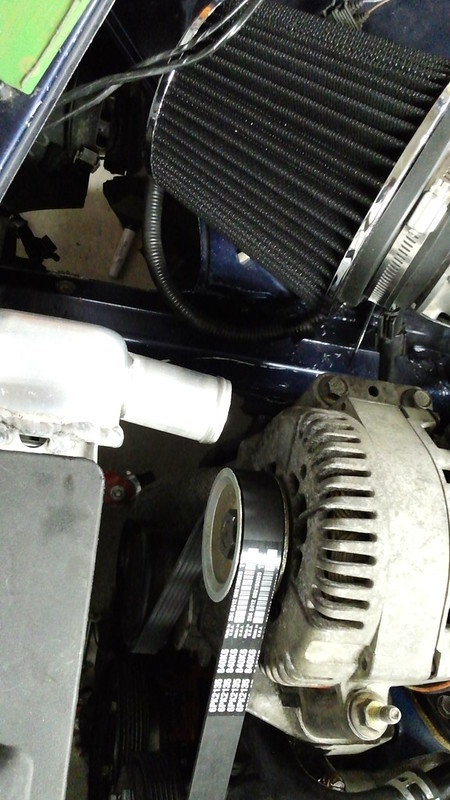 Mocking up the radiator: Upper 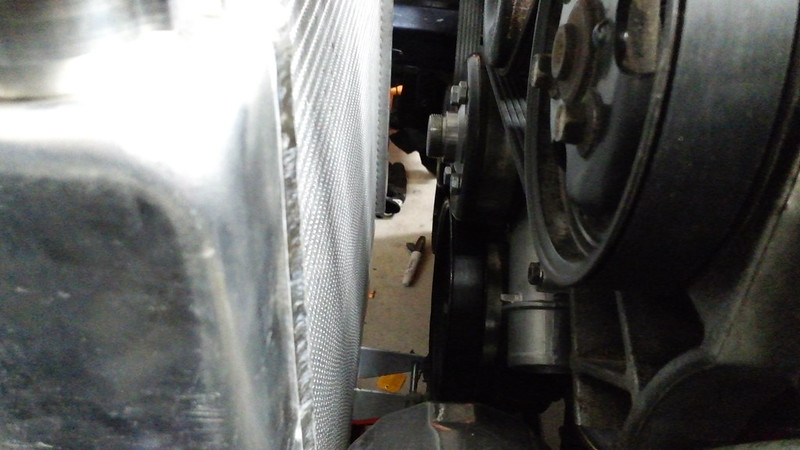 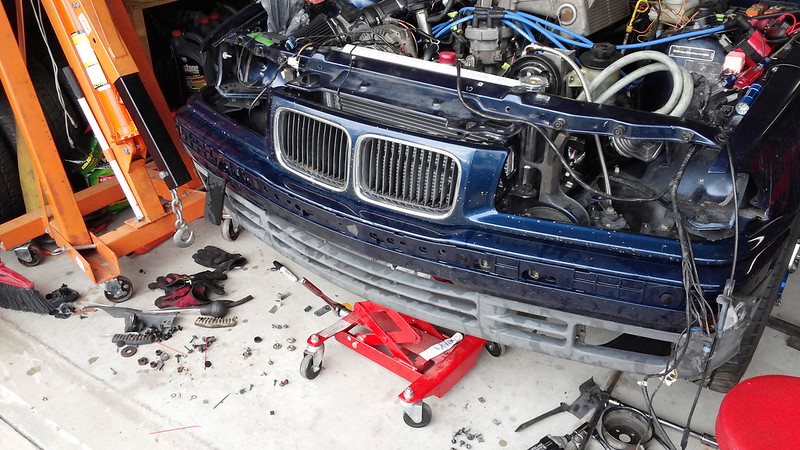 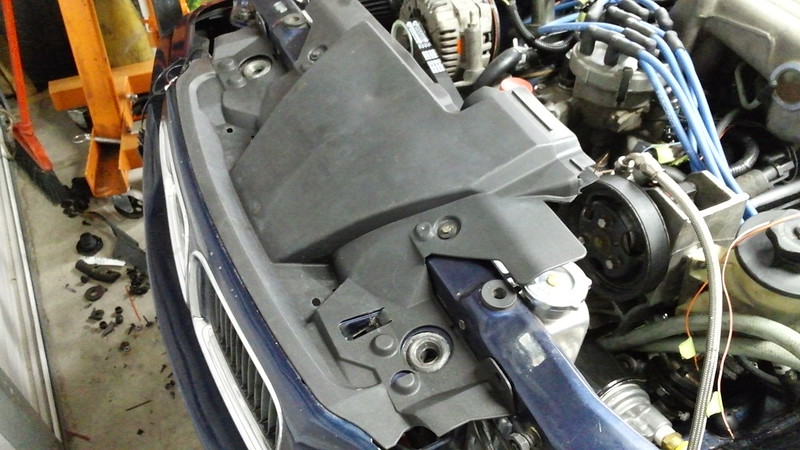 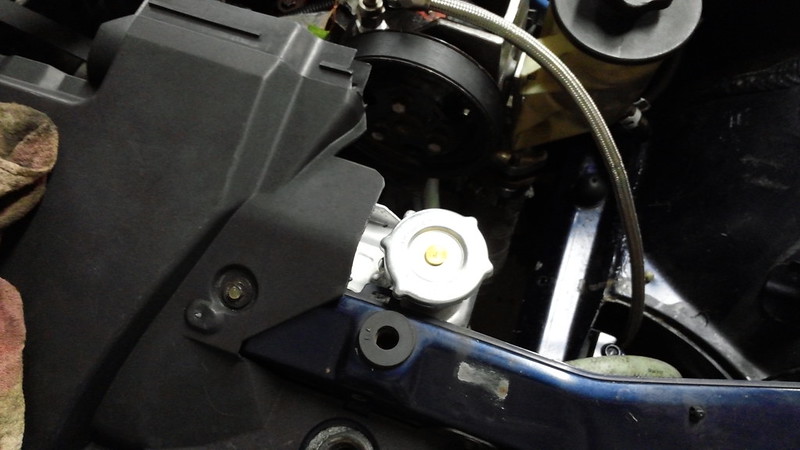 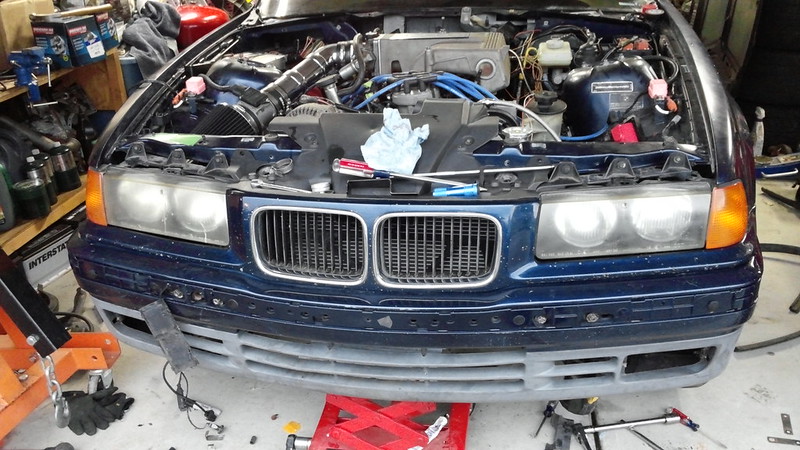 What a pretty face! 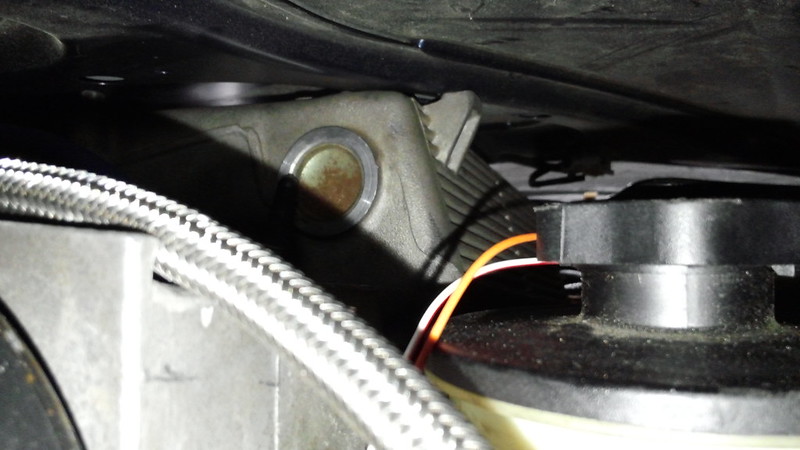 I cut out the cross bar that the E36 condenser use and mounted a two speed Volvo fan as a pusher.

Tomorrow is adding the fan relays and finish wiring. I'll have the car up in the air (jack stands . . . no lift here) for the suspension install.

So . . . I didn't make the 30 day deadline of the car driving out of the garage . . . but I got a LOT farther that most have expected. Don't worry, it will be ready for the Dragon!!